Triglav National Park: the most beautiful region of Slovenia 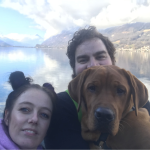 Ever heard of Triglav National Park? Neither did we. The best thing about Slovenia is that it completely overtook us. It was August in 2018 and we were on our way back from our summer holiday in Croatia with our little blue Volkswagen Polo. After we had a wonderful time on Croatia’s pebble beaches, it was time for a little more action. We decided to finish the trip home in roadtrip style and drive back to the Netherlands through Slovenia, Italy, Slovenia (again), Hungary, Austria and Germany. Because yes, if you are out there, why wouldn’t you. Right?

“We decided to finish the trip home in roadtrip style…”

The first stop from the north of Croatia (we had been to the Plivitc lakes, but that’s another story) was our overnight stay in Slovenia. Our destination: Trenta!

Very honestly, we have never been to Slovenia before. Not consciously, just because we didn’t really know what we would think of Slovenia. In general, Austria, Switzerland and Italy appealed to us more and we have never really had a picture of Slovenia in our minds. Still, it was sort of a mandatory intermediate step to drive through if we would visit Italy from Croatia. From our holiday home in Croatia it was about a 5 hour drive to Trenta and we decided to leave around 8 ‘o clock in the morning, so that we would arrive on time at our destination in Slovenia, so that we could do some shopping there before nightfall.

Triglav National Park: the best drive we ever had!

In hindsight, this one 5-hour drive would forever change our image of Slovenia. Actually, the journey didn’t start very spectacularly. From Croatia we first drove on provincial roads for 2 hours at a maximum speed of 70 kilometers per hour. When we finally got on the highway, it felt like we had been driving for an entire day. Little did we know. After an hour of driving on the highway we got the exit in Slovenia that we had to take. The navigation gave the route to be taken and displayed the expected arrival time, as he had done all holiday. Distance: 10.4 kilometers. Expected travel time: 1 hour and 44 minutes. What?!

Spoiler alert: Yes, we made it to Trenta eventually.

There is one road and one road only, through Triglav

To get from one side of the mountain to the other (yes, where Trenta is), you have the opportunity to get from A to B via an infinitely long and beautiful road. Full of hairpin bends, spectacular views, piles of rocks, buses and trucks blasting through the bends with true contempt for death and a nature so beautiful that we kept our mouths shut for an hour and a half (apart from the “Waaaauw!” And the “Look over there!!! ”).

“Full of hairpin bends, spectacular views, piles of rocks, buses and trucks blasting through the bends with true contempt for death…”

It is simply impossible to describe the impact of the Triglav National Park in a few words. This is truly one of those places in the world that you have to go to in order to fully realize how insignificant we as humans are and how overwhelming and fantastic nature is around us. We sat breathlessly in the car, after we continued driving hairpin turn after hairpin turn. This single ride forever changed our perspective of Slovenia and the country immediately rose to our top 3 favorite countries in Europe.

To be fair we have to confess that the reason we booked an accommodation in Trenta was the Soča river. We fell in love with blue water in Croatia and we don’t think it gets anymore blue than the water of Soča river, at least not in Europe. We had a fantastic few days in Slovenia and the Soča river was beautiful. But the highlight of our ride and Slovenia is and always will be: The blood-curdling beautiful drive through Triglav National Park!

“This single ride forever changed our perspective of Slovenia and the country immediately rose to our top 3 favorite countries in Europe.”

Investing in quality items for vanlife? Totally worth it.
June 14, 2020

Triglav National Park: the most beautiful region of Slovenia
April 20, 2020

Any cookies that may not be particularly necessary for the website to function and is used specifically to collect user personal data via analytics, ads, other embedded contents are termed as non-necessary cookies. It is mandatory to procure user consent prior to running these cookies on your website.